On Kindness and Foolishness (The Matthew 25 series). 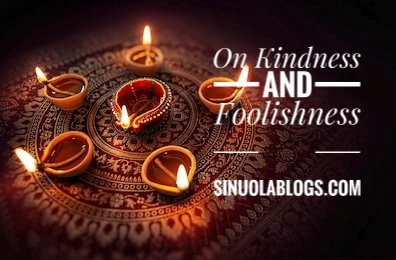 So Matthew 25, popular story right? Let’s talk about the wisdom of the sisters in not giving. A bit of an irony because I mean, we’re encouraged to give, give and give, to everyone- non believers as well as brothers and sisters of the household of faith.
The Bible makes us understand that the five wise virgins who had oil without mincing words told their fellow sisters that they were not willing to give out some of it. Unlike other things which they must have willingly given out in the past, this oil was for their personal use. The wise virgins understood quite well the effect giving out the oil would have on the giver as well as the receiver. I love the way a yoruba version puts it: ‘ki o ma ba se alaito fun iwo ati emi’. Simply put, no hard feelings but this isn’t for public consumption.
In one of my classes in school, I remember a lecturer talk about self assertiveness. How sometimes, you need to learn to say “no” and do so unapologetically. The wise virgins were saved not because they stayed awake all night. As a matter of fact, the bible records that they all slept when the bridegroom tarried. They were saved because they had extra oil; their lamps didn’t die out. And also because they were wise enough to recognise that giving out part of the oil would sabotage their eternity.

Beloved, let me ask you, what is that oil that is been demanded of you? Have you stopped to consider if it’s a personal one? If yes, are you still contemplating giving it out? Your quality time with the father could be your oil. Someone trying to take that time from you? You shouldn’t share, not even with your spouse.
Many of us have given all of our oil of faith in God to the cares of this world. The hearts which ought to be filled with praise to and faith in God are filled with anxiety and worries. We then wonder all of a sudden how we got strongholds of unbelief at work in us.
Hello young believer, inability to recognise and terminate spiritually toxic relationships could mean you need to take a look at Mt. 25 again. The ten virgins moved and stayed together, but the length of time spent together did not make the foolishness of the first five to rub off on the other five. Their wisdom was able to direct them. And oh! It did profit them.
I’ll end with this: ‘…but go ye rather to them that sell, and buy for yourselves’. This was what the wise virgins told the rest, and it was not counted against them as wickedness.
When your bridegroom comes, may he find you not just with your lamp. May he find your lamp trimmed and bright.

Let him that reads, read with understanding.

Letter to the struggling beloved

Facing temptation: Don’t we all?

On natural compromises in the Christian’s life.