Soul Stricken yet not Broken. 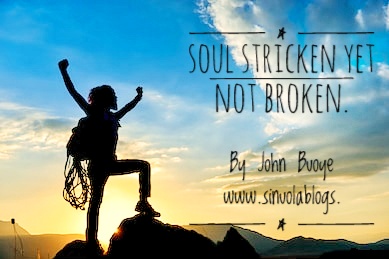 I’ve asked many questions about Jesus in respect to his own emotions in the days of his flesh. I have questions answered and those left unanswered still. I wonder, he being a man of many sorrows (Isaiah 53:3), a man of emotional anguish and trauma (Luke 22:44); in the days of his flesh, being one of great distress, bearing the weight and being slain in his own mind sometimes, by the shadows of a cruel death. I think for him, was the worst kind of life expectancy, a life for all and none for him. He saw the greater glory like some of us see now, but it did not lessen the burden of his cross to be carried. Then I realized it was real. He, Jesus, faced heavy depression and soulish torments of grief. I realized it was real, that He, Jesus, had sorrows bigger than he could say. He brought back to life the son of the Widow of Nain, and I want to think how he felt when he got home that evening, knowing that Mary, his own Mother would have a dead son too, brutally murdered for doing nothing but good. I want to think how he felt when he fed five thousand once, and four thousand another, when he knew that in his final hours He’d need nothing more than water, and it would not be available, after a day of trekking and gruesome bleeding. I want to think how he felt when he knew, being sure in himself that one day, he’d be replaced by Barrabas, and hung side by side with common village thieves and rouges, when he had forgiven a lot of dreadfully sinful men, and changed their own lives. I believe too that these were his everyday emotional realities. Sometimes it’d be so heavy that after a long crusade he’d ask the disciples to go, that he needed to pray some more (Matthew 14:21-23). Was it to gain more power, get more strength, have more peace on the inside? Probably those and even more. He needed reflection, he needed to let out grief, he needed someone to listen, someone he never could see at the time, but in his heart. Also, about the eleventh hour. Three times he wished the cup could pass. All the sufferings, all the emotional torture, all the meanings to his coming here; but He said wait, “I’ll wait”. Such strength, such vigor, such completeness, such perfection. In the last hours of death he didn’t curse or seek revenge. In his arrest, looking at Peter with a knife, a sense of meaning came to him, a sense of fullness, an understanding of how powerful he was. Probably like Elijah, without the Father being involved, he could portal down fire angels to roast all of them who had come to arrest him with mortal knives. But he said, “No, I’ll wait”. So, bro, Jesus had emotional tragedy too. But we see strength in the end of it all.
Bringing me to my question, where did all of that strength go? Who inherited it? Did he give Joseph of Arimathea as a gift for a decent burial place? Or did He leave it with Mary as a gift for being His Mom so she didn’t have to cry when midnight had come and her consolers were dead asleep? Or did He even impart it with the Holy Ghost? The answer for me is simple: “I’m joined with the Lord, therefore I am one Spirit with him” (1Corinthians 16:17). I inherited it! When He died, and when He resurrected, he joined me with him, so that I could have the connection to all the things that he ever perfected in himself after series of trials. So, rather than therapy for me, I just need to reach in deep through the Spirit by which I am joined to the Lord. Was I joined to his soul, or to his body, or to his Spirit? I’d say all. So, to his emotional strength, I’m joined to that too. I can reach in deep, for he had already overcome fear and shadows of death, the worse emotional curse a man could have. Therefore, I need not fight any battle or clear through any therapy, I just reach in by his Spirit to draw from what He had fought and finished.
Isaiah 53:4 “Surely he hath borne our griefs, and carried our sorrows: yet we did esteem him stricken, smitten of God, and afflicted.”
He finished that too, Jesus fought through it all and won for you.

From Your Brother,
John Buoye.