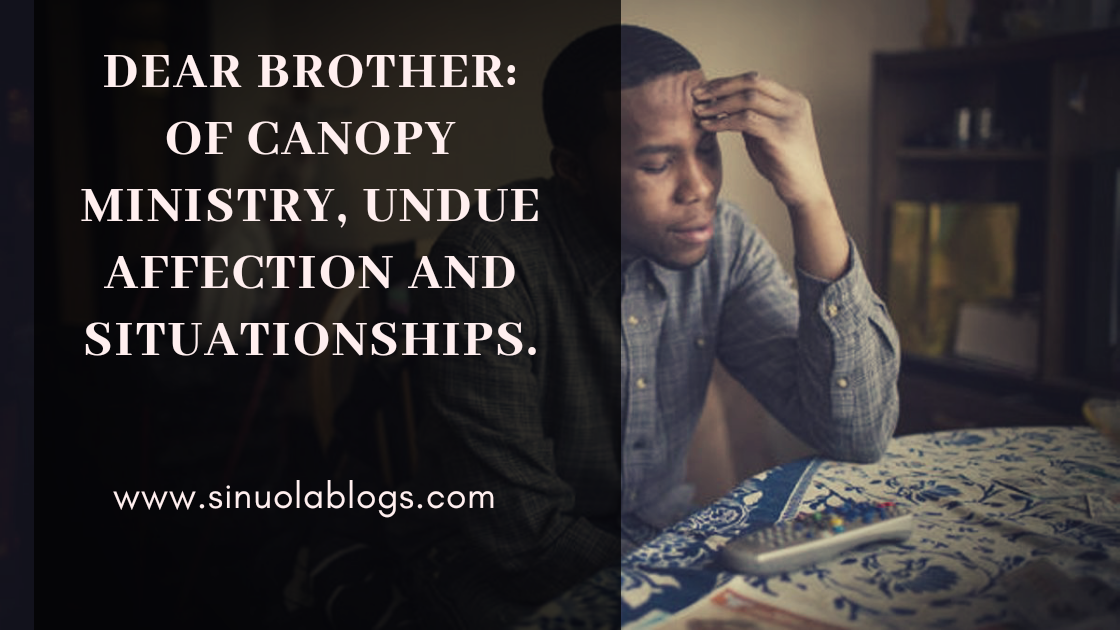 I heard Sis Carol caused a scene in church last week, that an argument ensued between you two while you were having what started out as a private discussion. Even the pastor could not get her to contain her outburst in time. And so, when she eventually got a hold of herself and proceeded to the pastor’s office with you, a few onlookers already had an idea of what the bone of contention was. One of them reached out to me.

You see, I heard that Carol got wind of your upcoming traditional marriage ceremony. From her display, it would be safe to say she did not take it well. And for some days now, she has been raining down ‘fire and brimstone-like’ prayers on an unknown betrayer and every time-wasting evil doer in her life on her Facebook and Whatsapp status. Almost like a revival out there on her TL.
But last of all, just today, I heard she has been rushed home for treatment after her roommates began to notice that her health- physical and psychological was beginning to fail.

Dear brother, her predicament is the subject of almost every discussion in school.
“Haba, she’s taking this thing too far.”
“Is she the first to suffer disappointment in a relationship?”
“Why won’t she move on?”

Truth be said, some of these statements are in order, and may be directed at her so can get a grip of herself. However, I have a question for you. “What was your role in all these?”

Now please don’t give me that look. Majority of people around with observing eyes had the impression that both of you were in a serious relationship. I mean, you had to be. How come you’re getting married to a sister we don’t even know? Where did she appear from sir?

Before you hit me with “I have the right to choose my future partner without pressure”, let me ask, do you also have the right to give innocent or should I say unsuspecting and naive sisters false hope only to dash them in the most cruel manner? Do you?

Do you have the right to call her “my dear, my darling” everyday, show her preferential treatment in public, show concern and care more than you do to other mutual friends, not to mention your calling every time without stopping to ask yourself ‘what am I doing?’

And the thing is,you cannot claim total ignorance of the moment you became the center of her universe. You cannot be so emotionally insensitive not to notice how her eyes light up at your presence, or how her sad countenance and mood changes at your voice, or how she obviously goes out of her way to be with you or make you happy.

You invaded her space and became a constant face in her affairs. You call to enquire if she had dinner, how her day went and also take out time to feed her spirit man. You are always at her service to expound and expatiate every bible study topic discussed in church. Personal Bible Study Secretary!!!

Who knows whether you were majorly (or jointly with others) instrumental to her becoming a christian or a more dedicated one. If yes, then you introduced her into the faith and then bombarded her heart with confusing emotion. Yes that is what you did. And you may be guilty of emotional manipulation whether deliberate or accidental.

Just in case some of my dear brothers reading are still in the dark as to where I’m headed with this piece, I’ll spell it out for you: You also have a duty to draw the line sir!!!

MOG sir, no one is saying your actions are bad or sinful but please watch your action lest they cause others to stumble. I believe that as a leader, you can have the respect and love of the people (read sisters) under you without being overly affectionate. It is all in the way you comport and carry yourself.

Every sister is not your ‘dear’ or ‘darling’ sir.

In your relationship with that sister, you know within yourself when the relationship is veering off the platonic path. Why feign ignorance and encourage it? Why let her build the castles in the air hoping she’d just get up and move on once it crashes to the ground?

I do not believe it is befitting for a kingdom brother to have against him a number of sisters (too many to be excused as coincidence) being led on and subsequently heartbroken by unnecessary show of affection, undue attention and all the emotional baggage that come with it. You can be an example of Jesus and still go about showing care with wisdom and discretion.
There are some lines that should be maintained for sanity even in the church and a level of decorum that should be observed amidst our joking together as brethren of the opposite sex.

So, learn to draw the line. It would do you and your reputation as a christian some good too. You’d have no situationship wahala, and you’d even be able to discern from a distance, wolves in sheepskin sent to cause you to make a mess of your faith.

P.S: If you haven’t read my letter to the ladies on situationships,click here.

Dear Lord, it’s me, I still have no love life.

You are, because He is.